On a plateau above the karst edge, right behind Črni Kal, lies idyllic village, where peace is only disturbed by constant railway traffic. But there are rocks here as well. Since they are not high enough for serious climbing, they became a perfect playground for bouldering. Especially the cave close to the village is something special and historic, while a little later another spot, nicknamed Černobil, was developed close by. If you are near Osp and you forgot the rope, this is a great place for your daily dose of crimps and slopers.

Leave the highway on exit Kastelec and turn for Podgorje. Continue on the main road and ignore the first turn for Črnotiče. You will arrive at the sandpit/quarry Salonit. Drive on. Rock barrier (with some sport routes) is on your left, with boulder spot Černobil at the far end, before a left turn. Park before that, without disturbing anyone. For the cave, continue on the road, sticking to the right, towards Podgorje. Again ignore the first turn for Črnotiče and take the second, on a dirt road. Turn right and the path winds through the woods. The cave is on your right, easily spotted. Park a few meters further, left of the crossing, of course as undisturbing as possible.

WAY TO THE CRAG In both cases there is only a short walk to the wall, but be sure that you’re parked correctly.

There are a couple of options nearby for sleeping; hostel ROBIDA is located in the village of Črni Kal and it is next to a restaurant. A couple of houses rent apartments in the village and you also have Osp that’s just a few minutes drive into the valley. There you can choose from camp VOVK and hostel and apartments POD KOSTANJI. In camp VOVK you can also get good food on weekends and busy days. If you don’t mind driving a couple of minutes, there are also nearby hostels XAXID and OCIZLA in vicinity, and restaurants like ŠVAB in Hrastovlje, SOČERGA near the border, Mahnič and Tonca in Kozina and even more options in Koper.

We would definitely recommend staying in these climber-tested establishments:

BEST SEASON The best conditions are in spring and autumn, but since bouldering is a medium for lower temperatures, also winter is good, as the cave gets enough sun. Even in the summer it is fresh, if it‘s not too hot.

SUN & SHADE Sun comes in the afternoon, while shade can always be found, especially in the cave.

RAIN Cave can be climbed even in rain. After heavy rains, routes can get wet for longer period of time.

STYLE & ROUTES The rock is perfect, in the cave mainly with slopers and weird tufas, overhanging and focused on dynamic climbing. Černobil serves a more technical and crimpy climbing.

GEAR & SAFETY A couple of QDs and a short rope is enough for routes, but bring  crashpad(s) in case you fall in the beginning of the route or if you intend to boulder. Bear in mind, that the grades for boulders are not the same as those for rope, but at least about 3 grades harder!

KIDS & COMFORT The base of both sectors is comfortable and safe. Close to Černobil there is a busy road.

BEGINNERS Honestly, you can only do a bit of an exercise. 1/5

ADVANCED Many different boulders and even more variants between them. Great training for power. 4/5

THE BEST  Especially the cave is an interesting training ground, from long traverses to short problems. 3/5

WARNING We probably don‘t have to remind you that any illegal camping, making of the fire or improper parking is strictly forbidden. Try also to avoid driving through the village.

HISTORY Črnotiče is a historic place for Slovenian climbing. Legendary master of overhangs and lover of karst edge, Tadej Slabe, discovered it a long time ago and in 1986 climbed here the (then) hardest Yugoslavian route, named X, later followed by Gnojna bula, Gangrena and Gibanica. This is his secret „boulder spot“, where he acquired his mythical strength for Sanjski par, Staro kolo and other projects. Of course, the true potential of this remarkable cave in the middle of woods close to idyllic village was even then visible in bouldering. Later the cave and the barrier Černobil were rediscovered and revitalized by young generation of our boulderers starting with Urh Čehovin, Jernej Kruder, Boštjan Weingerl, Grega Šeliga and local enthusiasts, such as Marko Zadravec. Especially in the cave there are some grueling problems. 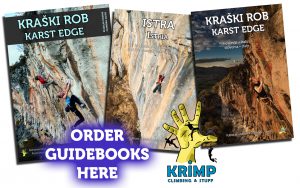 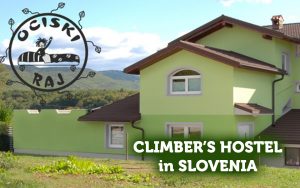